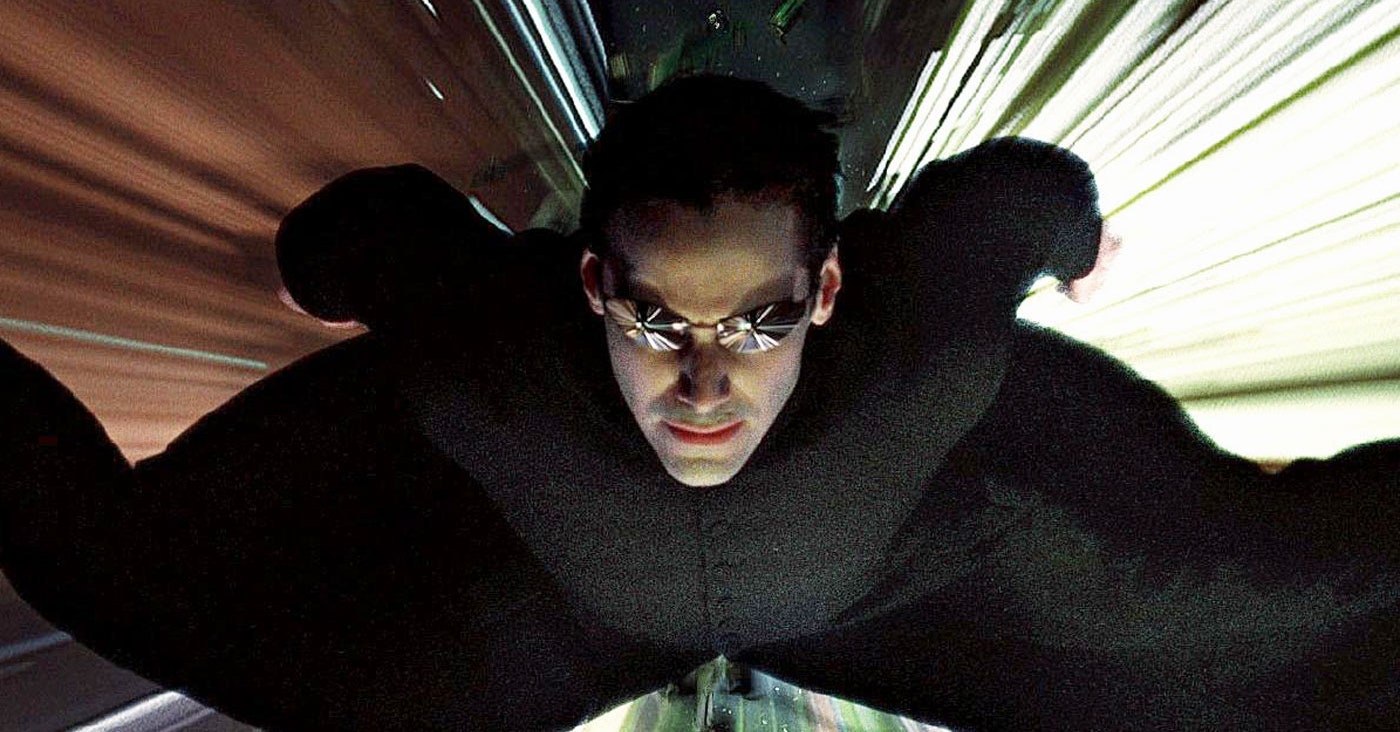 You’re talking about The Matrix at a dinner party, and that’s fine. As the founding document of our present hypermodern unreality, it’ll always be, 20 years after its release or 200, fair game for chat. Over medium-rare steaks that may or may not be 1s and 0s, guests happily quote the Oracle (“Take a cookie”), defend Keanu’s acting, quote Agent Smith (“It’s the smell!”), rehash Baudrillardian basics, and convince each other that there is no soup spoon (but pass the soup).

Then the inevitable moment comes, and it is not fine. Some dweeby gasbag in attendance—picture him now; he may very well be you—gathers up the requisite oxygen to declare, with huffing sense of purpose and in sweaty anticipation of back slaps and applause: “Those sequels sure did suck, though!” Dammit, there goes the buzz. If only someone could unplug this phony soul, this over-baked noodle, this robotic amalgamation of parts—spare him the shame of looking the undignified fool.

The fact is, the Matrix sequels do not—forgive his barbarism—suck, and to claim that they do, to side with the dweeb and the cultural majority he somehow represents, is simply to lend further credence to the Wachowskis’ vision of a world where thought is all but pre-scripted, emotion manufactured by machine. So uh, do you take your blue pills in the morning or before bed?

Fine, maybe that’s unfair. Maybe the dinner guest—the dinner guest who might also be you—isn’t entirely to blame. Now that science fiction has been, as they say, mainstreamed, there’s social pressure to prove nerd cred. Cute, I suppose, but what this looks like in practice is a bunch of fakers bashing the acceptable properties. The Star Wars prequels stink so hard! You know what embarrasses me is Big Bang Theory! The Matrix sequels suck!

Pathetic. Then there’s the idea that there might be merit to the whole anti-sequel stance. The first Matrix changed our perception of reality, so the second should have done likewise, and the third again. Inarguably, they did no such thing. Yeah, well, as Morpheus might as well have said: The mind cannot be blown the same way twice.

No, there really are no excuses, just kids who felt mind-unblown by the second and third Matrices, validated in turn by the selfsame judgments of fellow unthinkers, and content to swill blue pills until today, when one of them ends up at a dinner party and proceeds to spoil the mood. The worst part is, other people at the table will probably nod. Yep, computer gobbledygook and white ghost things with dreads and didn’t they have to replace the Oracle? Haha, so dumb. People are expert at enabling this type of weakness.

Here’s the truth: The Matrix is nothing without its sequels, and you’d know that if you watched them. Actually watched them. Not judged them because the first one made you cream yourself and then the second one had worse CGI and more fights (which it did) so boo to all that. Have you even seen them recently? They’re on Amazon now. Free your mind of expectations and boot them up. Consider the story the Wachowskis are telling, not the potential for intro-to-philosophy mindfuckery. Then you’ll see that The Matrix Reloaded and The Matrix Revolutions are inversions, complexifications, mystifications of the original—a breaking out (of the Matrix) undone by a breaking in (to Zion) that finally leads to a breaking through (to a hard-won peace).

OK, I’ll spoil some of the revelations you’ll have. Reloaded begins with a scene that should feel very familiar: Trinity running running running and then diving through the air, turning around to point a gun at a foe. Image by image, it echoes the sequence that opens the original. There’s one difference: This time, Trinity is fatally shot by the pursuing agent. The Wachowskis are savvy, obsessive filmmakers—they’re not just throwing sequel money at the big screen. Here they’re telling us: Reloaded will invert what came before it. (Even the name, Reloaded, which you might call cheeseball, plays up a sense of pullback, redoing.)

From there, they don’t let up. You spend as much time in Zion, the last human city, as the original spent in the Matrix. Your impression of the Oracle flips, from folksy black grandma to computer program who chooses to present that way (and has secret motives). You meet the Architect, her foil: an old white guy who talks like a snob. Nearer the end, Trinity indeed dies, only to have Neo resurrect her, hand literally around her heart. You’ll remember that, at the end of The Matrix, Trinity resurrected Neo with a kiss. At the end of that movie, Neo soars away, Superman in a trench, empowered by his defeat of Smith. At the end of Reloaded, Neo’s locked in a coma, enfeebled by his encounter with a machine. The opposite image.

The third and final movie, Revolutions, is synthesis. The realms blur and shade into one other. Neo is trapped in a train station, blindingly white, between realities. Eventually, he is blinded. He meets the machine-gods. He dies. So does Trinity. Neither can save the other; both accept that you get one resurrection.

Just before that, Neo stages his last fight with Smith, a final-boss battle complete with epic choral chants, crashing buildings, and gushing rain. In the first movie, Neo fights Smith one-on-one. In the second, he fights a never-ending stream of Smiths, the program having propagated itself through the Matrix. In Revolutions, he’s back to fighting a single Smith—while millions, billions, of identical Smiths watch. The main Smith has the eyes of the Oracle. Even identities have blurred. Everything comes to a point.

Why go on? There’s so much more to say, but our dinner guest doesn’t care about any of it. He has one aim: to win favor. He’s not interested in joy, in originality, in storytelling, only pooh-poohing for easy points. He’s not interested, in short, in loving something, which is and always will be the true preoccupation of the genuinely weird and wonderful. He’s a fraud, and in his insecurity he spreads his fraudulence, his deception, his blandness to weak-willed others. He is Agent Smith, the inevitability of a sick simulation.

Had our dinner guest only sat with these movies in unselfish contemplation, he—you—might’ve seen that they were a beautifully told warning. A warning against conformity, a vision of a software-eaten world of perfect, catastrophic sameness. Neo sacrificed himself to destroy the likes of that—to destroy the likes of you.

Check out all of our 20th anniversary coverage of The Matrix. If you want to revisit it, The Matrix trilogy is free on Amazon Prime.

(Note: When you buy something using the retail links in our product reviews, we may earn a small affiliate commission. Read more about how this works.)